There’s an exciting new Chinese restaurant and takeaway in Melville’s 27 Boxes, just 50 metres from where I live, but it took a chance Facebook sighting for me to discover the new kid on the block.

How times have changed. It used to be that nothing went down in my neighbourhood that I didn’t know about but Covid has changed all that. I haven’t eaten out in 18 months. In fact, I’ve barely ventured out so I missed this little gem’s arrival on my doorstep.

I happened upon its existence on my friend Jay Cee’s highly popular I Love Melville (ILM) Facebook page, where he had posted photos of all the treats he had sourced locally for his mom on her birthday.

I immediately called Charlie Chen, the owner of Chopstix, and my new BF.

Friendly and helpful, Charlie took my order, which I thought would be ready for collection in a flash. A friend had offered to deliver it to me but we were both surprised to discover Charlie prepares everything from fresh, which takes time but adds value for this consumer.

The menu is not extensive but I still felt spoilt for choice as I pondered the Small Plates, Dim Sum, Mains, Noodles, Sweets and Extras. For starters, we chose Edamame Beans (R35), freshly boiled with rock salt and soy sauce; Cucumber Salad (R32), described as smashed cucumber with Chinese vinegar, soy seasoning, garlic and coriander. For our mains we had Signature Prawns (6pc for R140), which is deep-fried, crunchy potato-crusted prawns with a hint of wasabi and mayonnaise; and Kung Pow Chicken, which consists of tender chicken blocks, wok-fried with peanuts, chilli, vegetables and sauce. I added on some plain noodles with spring onion and sesame oil (R18). Short review? Yum. Everything was delicious and moreish. And the presentation was first class, with each item boxed and wrapped in brown paper. Ev

en the better-than-usual chopsticks were sealed in brown paper.

Charlie, who hails from Xiamen, a port city on China’s southeast coast, arrived in South Africa 11 years ago when he was 18. Unimpressed by Chinese food on offer, he decided to open his own restaurant. Concerned about Covid, he wanted a compact venue where he could comply with Covid protocols. A friend introduced him to 27 Boxes, which he decided was perfect for his debut in the world of food. And so it is. 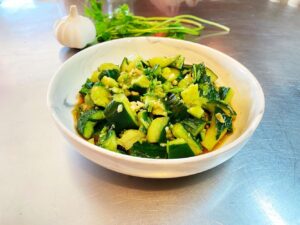 Charlie says he plans to introduce new dishes regularly and he will try and accommodate individual tastes. Why not go and introduce yourself and tell him what grabs your fancy? You won’t be disappointed.