The night before Easter Friday, President Ramaphosa announced a two-week extension to lockdown. Just a fortnight prior, he declared a national disaster but in a sense it feels like a lifetime ago…

Before lockdown was even a known entity, I wrote a column on my Prowrite Facebook page titled Home-bound: Staying Sane in the Age of Covid-19. It is now Day 15 of lockdown and the surreal aura that dominated our suburb on the first day seems to have dissipated as we adapt to living at home without physical contact beyond our gates.

I had an inkling of what would surely come and I’d already begun staying home, taking stock and taking charge, and I already felt the world, our world, would never be the same again.

The year had started ominously for me. On 19 January, I received word that my mother – six months beyond her 100th birthday – was not responding to her carer and I immediately started trying to get a plane booking from Johannesburg to Durban but it was a Sunday and flights were limited. En route to Lanseria Airport, my phone rang and it was my mother’s doctor (himself in his 80s) who conveyed the news I feared. I phoned my siblings and waited to board the plane not knowing who would be at my mother’s apartment when I arrived. The door opened on an emotional reception, which moved me to tears – all my mother’s carers and a regular visitor from her block of flats awaited me.

I felt quite numb as evening approached as it was very odd being in my mother’s apartment without her present. The flat had never been my home – my three siblings and I spent our entire childhoods with our parents in a house near the university – but it was familiar. My mother’s neighbour suggested I stay the night in an available, empty apartment and then invited me to join her and a friend for dinner in the building but I turned down both invitations, well-meant as they were.

I opted to stay in my mother’s home and I was both moved and relieved by two of the carers volunteering to keep me company on that first night of being without my mother. Over a Nando’s dinner, which I had delivered, we spoke of my mother and it was comforting to hear of their love for her and how she’d played a positive role in their lives. Even at age 100 my mother, a born teacher, remained curious about the world and her appetite for visitors never diminished.

In a way, spending some time thinking about my mother here has been good for me even though when I started writing this piece I had no plan to expound on my mother’s death beyond contextualising my already altered state of mind and to say I’m very pleased Covid-19 was not a factor in her long life.

My loss notwithstanding, I was ready for President Cyril Ramaphosa’s first speech about the coronavirus on 15 March, although, as we all know, he was not ready for us. Left for hours to contemplate the ineptitude of SABC TV News, the national broadcaster seemed intent upon shoving religion down our throats – it was a Sunday after all – while we waited for news of how South Africa would deal with the virus. It reminded me of Clarence Keyter’s interminable wait for Nelson Mandela to emerge to play his public role in the new democratic South Africa and how poorly prepared Keyter was to deal with time standing still. Instead, he spoke about water and a dripping tap over and over again.

Returning to President Ramaphosa’s much-anticipated first address on the subject, the SABC anchor had the unenviable task of showing us an empty podium and empty chairs; the SABC had learnt nothing from its prior experience and the anchor was left, like Clarence Keyter, to improvise, which is almost always a disaster. Why they didn’t cross to the Union Buildings to speak to journalists awaiting the conference is anyone’s guess but extraordinarily, SABC TV managed to miss the beginning of the president’s address!

Fortunately, he was worth the wait and he received virtual applause from supporters who had been waiting a long time for him to distinguish himself as the president we hoped for. I’m sure no world leader would have sought to head up a country in the age of Covid-19 but I’m grateful that our president’s predecessor was no longer at the helm as we confront the greatest health challenge in our time. 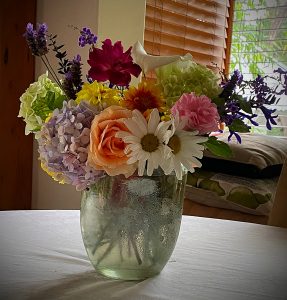 It’s a month since South Africa’s Patient Zero was diagnosed with Covid-19 after a skiing trip in Italy. Since then we’ve learnt a whole new language and behaviour requirements we had to absorb overnight. Hand washing, social distancing, self-isolating and sanitising are just some of the essentials in our vocabulary as we brace ourselves to “flatten the curve” to delay outbreaks of the virus peaking so that health systems have half a chance to cope with demand.

As winter approaches I ache for the already disadvantaged and despair what lies ahead for them, even as I realise Covid-19 knows no boundaries and the same can apply to any of us. Our health minister predicts we’re in the calm before the storm, which just adds another layer to my angst-ridden psyche.

And while the exchanges on WhatsApp community groups are heating up, I try to resist getting involved as sightings of lawbreakers are shared and some are opposed to them being reported to the powers that be. I wonder “aloud” whether those who think it is okay to walk the dog, to ride a bicycle and therefore to endanger all our lives, are the same people who are vocal about law-breaking in the townships. As the upheaval continues, I retreat back to my position of silence and return to my “routine”.

I keep myself busy and start every day at my computer, which is the norm for me, as is working from home. My usual four-times-a-week exercise regime with private instructors has reduced to twice a week via Skype with my personal trainer who calls himself The Torturer and I have taken my elliptical trainer out of mothballs

Somehow, as in my normal life, there aren’t enough hours in the day. I have so many things I plan to do, that many of them are deferred until mañana. I suggest that my musician husband makes a video and unsurprisingly we are on the same page. The rusty TV producer (me) films him singing one of his beautiful self-composed songs called Anthem, for which – way back when – I made a music video.

When I’m not writing, reading, watching TV or dipping in and out of Facebook and Twitter, I’m surfing the Net for viable delivery options for food, groceries, gloves, sanitiser, masks and you name it. My housekeeper and I have a slick routine for washing everything in warm soapy water and then we dry and spray as required and put things away.

We are the fortunate ones who spend time outdoors, weather permitting, and I derive immense pleasure from our beautiful garden, which delivers fresh, scented flowers every day.

But sometimes reality creeps in and my mind drifts to fears and concerns shared by most of us about this uncertain world ahead. Try as I may to banish such thoughts, they persist and I close my eyes to recall Michael J Fox’s motto that I once read in Vanity Fair’s Proust Questionnaire: “Don’t dwell on the worst-case scenario because if it happens, you’ve gone through it twice.”