JAY CEE is the mysterious new guy on the block who exploded into the Melville consciousness via social networks. If you’re a regular on Facebook, Twitter and WhatsApp, you know who I mean.

I’d become curious about the ubiquitous Jay Cee or JC as I now refer to him. We’d corresponded and exchanged views, but we hadn’t met. Not even when he came to collect a surplus of plants from our garden, as I was laid up in bed post-foot-surgery. In a note of thanks, he mentioned that his mother remembered our house taking in boarders back in the ‘70s, and he confessed that as a child he was a fan of my husband’s music.  I thought it time to redress the imbalance, to find out more about the man whose profile photo seemed to be a green blob. I invited him for a drink. 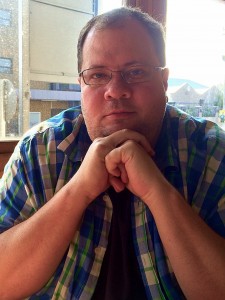 JC arrives bearing a huge bunch of proteas and I smile as he presents them. Larger than life, JC would look pretty silly with a bunch of sweet peas, say. I decide to get the formalities out the way. His initials are JC and the green blob where his profile pic ought to be is in fact a gun, which is the logo of his favourite computer game Hitman. He’s more comfortable talking about Melville. Although only resident here for the past 18 months, JC’s roots are firmly in this part of the world.

He lives in a house in 5th Avenue, which was bought by his maternal grandfather in 1952. He recalls childhood visits to the house and also to another in Westdene, where his paternal grandparents lived. His uncle was the dentist above what is now Adult World, although at that time it was the Melville Spar. In short, Melville is in his blood. He compulsively promotes the place and I wonder aloud whether he has time for a paid job.

“I do,” he replies emphatically. “I work for a Pan-African telecoms service provider based in Bryanston and we’ve been providing innovative end-to-end telco solutions and related services for just over 22 years.”

I can’t really tell you what that means but I know he’s a fibre optics fundi and is on the Melville committee that will hopefully bring 21st Century connectivity to us all.

I soon realise JC gives 100% to whatever he does, something also noted by Councillor Amanda Forsythe who co-opted him to join her in the administrative duties of I Love Melville on Facebook.

Like many other residents, I became aware of JC through his promotion of Melville restaurants. I ask whether he receives freebies or if he has an unlimited expense account. He dismisses my first suggestion.

“I take my mom out every weekend and each week we pick a different place in Melville to enjoy one of our meals,” JC elaborates.

His passion for this community is contagious, although he is no pushover. He’s outspoken about the various organisations in the suburb, which he feels could do more. Tongue-in-cheek, I ask whether he has enough energy to run Melville and if he’d like to lead the MRA.

“Yes,” he replies without hesitation. “The MRA needs an overhaul and that includes the leadership. We have to regain the trust of the community – business and residents – in order to excel.”

I ask what he would do differently from the current incumbents.

“I’d start by engaging with the community. Communication is key,” he adds. “It’s 2015, and with technology around us I don’t understand why it’s been such a challenge for the current MRA.”

He’d also like to involve more residents in various MRA projects and to uplift and unify the community.

“It’s very simple,” says JC. “Let’s replace some of the members and bring in fresh blood – people want to make a difference.”

To vote at the AGM on August 6, you must be a paid up member of the MRA. Contact Warrick Soulsby (wasoulsby@telkomsa.net) for payment details.