Jenni Baxter co-owns and publishes SAPeople, the ever-growing online presence for South Africans everywhere. Currently based in Antibes, France, she says it also keeps her in touch with her home country. 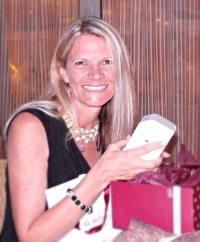 SAPeople has around 350,000 unique visitors to the site per month, and on Facebook we have 67,000 followers with a reach that sometimes exceeds 3-million.

We aim to entertain, inform, inspire and connect South Africans. Expats tell us it makes them feel connected to ‘home’, while those at home get to feel great about where they are and proud of what South Africans are accomplishing at home and abroad.

Statistically, half the readers and FB followers reside in South Africa and the rest are around the world.

I’m an expat myself. I followed my dreams and moved to London in 1990 to interview some of the world’s biggest movie stars (including Charlize Theron). I lived there eight years, then married and moved to Australia for 12 years. We have three daughters (one of whom has an amputated left leg and a signed book with a special note from Oscar Pistorius!). We settled in the South of France four years ago to expose our children to an older culture…and haven’t yet left!

During that time there hasn’t been one day that I haven’t been closely connected with South Africa. My web company Bluex2 was involved in the build and maintenance of SAReunited, which was founded by Amanda Tsinonis to connect South Africans around the world. It’s now incorporated into SAPeople.

I grew up in Salt Rock, KZN, which was a very small but inspiring place. We played on the rocks where Shaka Zulu’s men had trained, my neighbour was in the Guiness Book of Records for breaststroke, I was at school with Pierre de Charmoy (who became one of SA’s hottest singers in the ‘80s) and I spent Sunday braais at former Miss World, Penny (Coelen) Rey’s cottage. So I’ve always been interested in people who make the most of their lives…and I’ve always loved writing. I wrote my first article for The Natal Mercury at the age of 15 – an interview with Aussie singer John Paul Young of Love is in the Air fame.

After graduating with a BA in English at the University of Natal, Durban (now UKZN), I lived just off the fantastic Rockey Street in Yeoville (sharing a house with Pierre), wrote for New Dawn and Talk magazines, and made many memories in Melville.

Jenni is co-author with Ted Botha of The Expat Confessions, featuring interviews with over 500 South African expats. The writing pair also contributed a chapter to Two Dogs, titled Should I Stay or Should I Go? Join the SAPeople community by going to www.SAPeople.com