Diane McCarthy is a CNN International producer based in Johannesburg. Always on the go, she has nonetheless found time for a new hobby…

None of Diane’s friends is really surprised that she’s found time for combining her love of cooking and music in a blog. 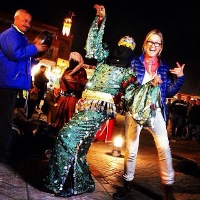 An art graduate of Stellenbosch University, Diane works in television as a producer of content for feature shows.

“I have been lucky enough to travel the world, largely on someone else’s dime,” she says with a grin. “Over the past few years, my focus has been on Africa. I have visited some wonderful places, met marvellous people and tasted gorgeous food.”

On her short sojourns back at home, she loves (almost) nothing more than escaping the traffic on her Vespa, weather permitting; she’s also a potter, a voracious reader, a good cook, very sporty and just for fun she sings and dances to the music at the drop of a hat.

“I know the idea of a food blog is nothing new, but it’s proving to be such fun to do.”

Called cooksouth, Diane’s blog, like her beat, focuses largely on Africa – every week a new story, a new recipe and some music to get you in the mood.