Melville’s vibey 7th Street was very different in the ’50s and ’60s as former resident, Herman Breedtremembers. He spoke to Christine Pretorius about some memories from his childhood. 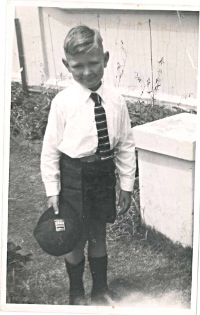 Anyone who grew up in Melville seems to have lingering, happy memories of the place they called home. Like many of a particular era, Herman’s favourite place – and the warmest in winter – was the kitchen, where the Breedt family got together to listen to the radio and “do family things”.

“My parents lived in a little semi-detached house in 6th Avenue, right next to the Apostolic Church,” says Herman, “with a big black coal stove that stood in the kitchen and the stone sink and enamel basin next to it.”

But he also spent a lot of time outdoors. He and his friends played and rode their bikes in the streets and on the Melville Koppies, and ran with kites made from bamboo, tissue paper and glue by Herman’s late father, Eddie Breedt.

It wasn’t that long ago and yet talking about the differences between then and now makes one realise just how much things have changed.

Before Nel’s Dairy started home deliveries in small, battery-driven trucks, Herman had to take the family’s enamel milk bucket to be filled at the dairy in 7th Street. Once home, he had to decant the milk into jugs.

Then there was the weekly rubbish collection by a wagon with an enclosed, brown, wooden canopy on top. A team of four donkeys pulled it and the bins were emptied through a hatch on the side of the canopy.

But, for the kids, the most intriguing aspect of living in Melville was a blacksmith with the surname Van Graan, who was also based in 7th Street.

“We often took our bent axles from our soapbox carts to him for straightening,” says Herman, “and were always amazed when he turned the big handle on his bellow, then put the axle in the fire and heated it to a bright orange and then straightened it with accurate blows of his hammer on the anvil.”

Those were days uncomplicated by TV, computers, cell phones, the Internet and social media. Life was so simple then!

Herman, a devoted sailor, hopes to retrieve some of that simplicity when he retires besides the seaside in the near future.